Thee Wylde Things - the roots of The Beatpack

The roots of The Beatpack really lie in a band formed at Thomas Peacocke Secondary School, Rye, East Sussex. Thee Wylde Things first emerged in 1985, a year during which youth culture and pop music in the UK reached something of a nadir. Gone was much of the post-punk energy and innovation, the E-fuelled Madchester stuff was a fair few years in the future and the charts were full of style bands like Duran Duran, Classix Nouveaux and so on. For teenagers growing up in small conservative towns out of the main urban loop and very much before the Internet, the only thing left to do was to look backwards in search of more substantive inspiration.

"I was born in 1969 and so grew up hearing the 60s all the time on the radio. There was no escape from things like The Beatles and The Stones. By the time I was 11 or 12, I'd been squeezed by peer pressure and gotten into Status Quo. I nagged my old man into getting me the Best Of twin cassette thing for Xmas one year and almost never got past the first song - Pictures of Matchstick men - which just blew my head off. There then followed a burgeoning awakening of psychedelic music. I listened obsessively to The Beatles and read the Philip Norman book, which name-checked things like The Strawberry Alarm Clock. I became obsessed with finding this stuff and this led down many weird and wonderful roads in this pre-Internet age. I started buying the music papers and remember well the SOUNDS Syd Barrett special, which kick-started that life-long crush for me. By the time I was maybe 15 or 16, I was writing the odd little bit for a fanzine called OPEL, which put me in touch with a guy who lived in Hounslow called Ivor Trueman. A bit later on, we both started a fanzine called FREAKBEAT, which I was quite heavily involved in for the first few issues as well, so all that put me in touch with a wider world of weirdos and obsessives and loons, the litle noetwork of like-minded freaks. 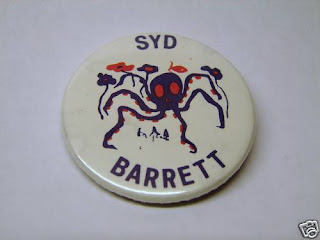 There was also a SOUNDS psychedelic special sometime round there, with writing by Julian Cope in it. I also remember listening to him on the radio playing things like The Tickle's Subway (Smokey Pokey World), which I'd still kill to own a copy of on 45.

I used to write off to Funhouse records in Margate, who'd send out a catalogue of old and re-issue records, and I'd always phone and order stuff as soon as I got it, using money from my part-time weekend job in a restaurant, where my boss was an ex-hippy who'd done the Afghanistan trail in the 60s and who lent me FOREVER CHANGES, DISRAELI GEARS and PIPER AT THE GATES OF DAWN when I started working there, aged maybe 14 or 15! My mum was living in London - Stockwell, to be precise - at this time, my folks having divorced when I was 8 or 9, and I'd go and visit,m and make trips down to Zippo Records in Clapham, which I remember having the 13th Floor Elevators eye painted either on the outside or inside wall. I started snapping up all the early re-issues there - Edsel and Eva and the Texas Flashbacks series and stuff. Also, my art teacher in Rye, John Stewart, lent me loads of good stuff - Moby Grape I got into from him. Finally, there was a guy up north somewhere called Alan Duffy who ran a thing called Acid Tapes, which put out weird 80s neo-psych stuff and that all filtered through. By the age of 14 or 15, I was the school freak, wearing second-hand paisley shirts and kipper ties and headbands and growing my hair out and shit like that, taking a lot of stick from narrow-minded meatheads in my immediate locale and getting hardened and used to looking after myself.

I managed to fall in with a kid in my year called Pete Kemp (aka Mad Pete), who also lived in Rye and we used to hang out all the time and listen to records. Into this small circle fell a guy called Phil Marriott, who played bass, and with the addition of Nick Colgrave on guitar, who I think we poached from another after-school group we heard practising in the school music room one night, doing - if memory serves - SMOKE ON THE WATER - shite, but very well played shite, which was more than the rest of managed! This random coagulation got named The Wild Things - and then THEE WYDLE THINGS - and from the off, really, were intended to be a raw, fun, party 60s band.

We made our very first public performance - God only knows how we were allowed to - doing a really chronic brutal version of WILD THING in a school assembly and then played at a couple of parties and the like doing things like SHOUT, TWIST AND SHOUT, GET OFF OF MY CLOUD and so on. Gradually, I got deeper and deeper into more basic garage punk, the BACK FROM THE GRAVE variety and Nick wanted to be doing real musician shit like Led Zep or something, which really wasn't where my hormonal teenage mindset was at, so we parted ways after perhaps two or three gigs (which, incidentally, we were doing even though we must've been 16 or 17 at the oldest at this point!), having first stuck an advert in a second-hand music store we used to frequent in Hastings, the nearest big town - half an hour away by train. This led us to two interesting things: the first was a guy called Andy Dinsdale, who was a fair few years older, had already graduated, had an amazing record collection, had taken acid, knew how to get mushrooms and lived nearby; the second was the teenage prodigy boy genius freak that was Louis Wiggett.
Posted by Hugh Dellar at 01:16 2 comments:

In 1987-88, the then-bassist Phil Marriott and drummer Luke Herriott went to some kind of art college in Hastings to do a foundation year. It was great for them, surrounded as they were by cute art school girls. Meanwhile, singer Hugh was working in a pickle factory and guitarist Louis Wiggett, who was maybe only 16 at this point, was still at school.

Somehow or other, the group got access to some cameras and film and ended up mining to a demo they'd recorded a while earlier. Here we have The Beatpack doing a song called Thinking About Today - one of many many cover versions of songs by the (Dutch) Outsiders that they used to do.

Other OUTSIDERS covers The Beatpack did back then included Touch, That's Your Problem, Filthy Rich, Misfit and I Love Her Still I Always Will.

The Beatpack were a bunch of scruffy mid-60s obsessed miscreants predominantly - but not exclusively - from the south-east of England, and the Hastings area in particular. They peddled a ferocious punk-tinged brand of raw, primal garage R'n'B around the UK and Europe between 1987 and 1991, recording an LP - Could You Walk On Water? - an EP and a 45 for Screaming Apple records, based in Cologne, Germany, along the way. All these recordings were produced by the legendary Billy Childish.

With this blog, we aim to collect photographs, flyers, recordings, videos and memories of The Beatpack and to make their vibe available to future generations.

To get things started, here are a few photos to whet your appetite.

First up, walking like an Egyptian down by Cleopatra's Needle.
This is maybe 1990 and the line-up was (back) Hugh Dellar (vocals), French Ollie (bass), Luke Herriott (drums), Simon Harvey (lead guitar) and, at the front, Joss Hutton (rhythmn guitar) 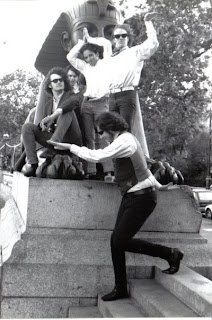 This is the same line-up and was probably taken on the same day.
How the girls on the scene swooned! 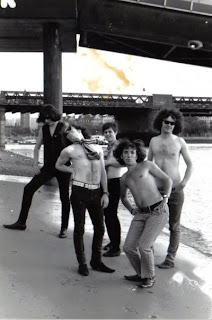 Next up, a different bassist, Paul Phillips (aka Welsh Paul, previously of The Pooh Sticks) resplendent in white, next to Oz chick Yasmine Kopita (she of the BORN LOSER fanzine), Sir David of Garwood (aka Neville Thumbcatch) and Simon Harvey.Dig the Brian Jones on sitar Stones photo on the wall. This was maybe 1990. 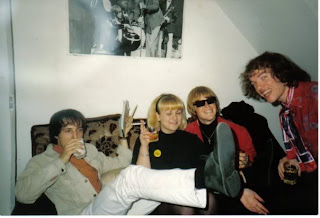 Here, drummer Luke Herriott (on the right) in his red velvet jacket that he got from a charity shop somewhere and that he believed made him look more like Jay Boor, the drummer of the mighty Q'65 on the cover of their Godlike REVOLUTION LP, hanging out with fellow-south coaster Tim Jackson. 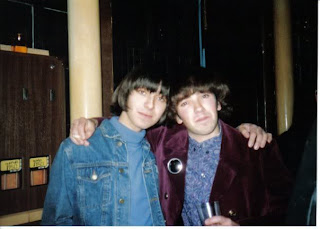 The Beatpack played in Scotland a fair bit, and in Edinburgh in particular, thanks mainly to a strong bond and affinity with the psych / garage scene that was in full bloom up there in the 80s. In this photo, Joss Hutton, in the white Charlatans (60s variant, natch!) hangs with Lachlan McDonald (left), Barnaby Dellar (right - the younger brother of Beatpack singer, Hugh) and, on the jazz fags, Lenny Helsing, he of The Thanes, Green Telescope and Beeville Hive V legendary status. 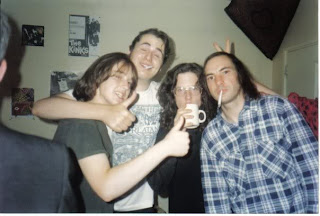 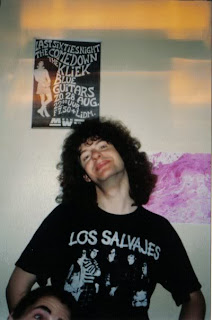 Drummer Luke in a rather singular apricot number looning with Tim Jackson and a rather heavy-looking Dave Garwood. 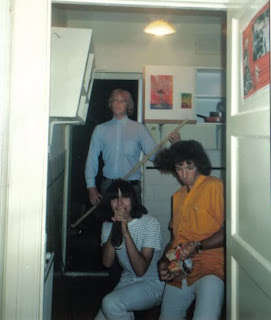 Welsh Paul, somewhat worse for wear, on the street in Catford, south London at 6am after a hard day's night. 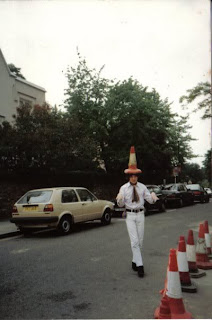 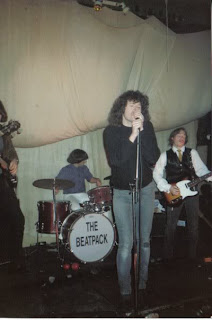 One of the classic five-piece line-ups with (from left to right) Joss Hutton, Hugh Dellar, Luke Herriott (hidden behind the drum kit), Simon Harvey and Paul Phillips. 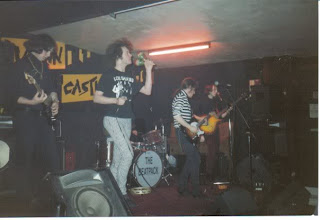 The benefits of a healthy Heineken intake clear for all to see.
1989-90 line-up (from left to right: Hugh, Luke, Joss, Simon, Ollie. 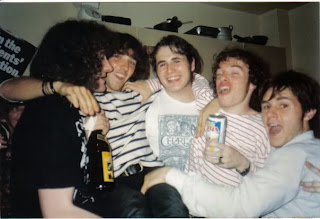